22 September 2020 / Webmaster / Comments Off on Monarchs Rein In Minotaurs

The first match of Round 3 of the Super League always promised to be a tense affair between the two first division sides with Monarchs searching for their first win and Minotaurs looking to extend their winning run to 3 matches.

In the first game Minotaurs Vickie & Pete K, unbeaten in their 4 games so far in the Super League, took on Monarchs Tony Smith & Roger Green.  The game was closely fought with the lead  changing hands a few time before Minotaurs turned the screw and ran out winners by 13-10. The second Minotaurs pair, Bernard & Pred, came up against Roger Griffin & Mike Jones. Bernard & Pred moved into an early lead but were pegged back by Roger & Mike only for Minotaurs to open up another lead which again was pegged back to 9-8. At this point Minotaurs, with 3 boule in hand, had a point for 4 and game, failed to take it with the first boule, put Monarchs on with the second boule and missed a shot for game with the third. Fortunately this didn’t rattle Minotaurs and they took the game 13-10 for a 2-0 lead at the change over.

The reverse pairs got underway and the first game between Vickie & Pete and Roger & Mike was another very close encounter with never more than a couple of points in it. With the score at 12-12, however, Monarchs took the final point to end Vickie & Pete’s four game winning streak. In the second game Bernard & Pred raced into an early lead and were 6-1 up. Monarchs Tony & Roger then picked up 1 or 2 points per end to slowly haul themselves back into the game and with the score at 8-8, Monarchs went into the lead for the first time, a lead that Minotaurs could not pull back, and Monarchs eventually ran out winners by 13-8.

A well fought, friendly but highly competitive affair between two extremely well matched teams which was reflected in the 2-2 draw with points also equal at 46-46.

In glorious sunshine, the club today held its first Women v Men Challenge Competition. The teams consisted of 12 players each and the competition was held over four rounds, two of doubles and two of triples. The team captains, Sean Smith and Gill Clark, picked the pairs and triplets to compete in each game and, as in the Cup for Clubs, there were 3 points for a doubles win and five points for a triples win.

In Round 1 there was notable win for the Women when Rose Fiera/Beryl McCarthy beat Roger Griffin/Tony Newton 13-1 but the Men returned the compliment with a 13-1 win for Mike Jones/Bernard Adshead over Vickie Adshead/Barbara Kensett. Perhaps the most remarkable finish was in the game between Sean Smith/Ian McCarthy and Judith Smith/Linda Halloran. With the Men leading by 12-8, captain Sean contrived to shoot out the jack with his last boule leaving the Women with 5 in hand giving them a 13-12 victory – as they “It’s not how you win …..”. The round finished with the Men leading 4-2 in games giving them a points lead of 12-6.

The second round saw the Men consolidate their lead by winning 5 games to 1, with the Women’s only victory coming when the Judith/Linda combo put one over on Bernard/Ian by 13-7. The round ended with the Men leading 9-3 in games and 27-9 in points.

Following a break for a picnic lunch, supplemented by some of Tony’s finest ales from the bar, Round 3 the 4 games of triples got underway. Would the Women fair any better in this format? In the event it certainly seemed so with the honours being even. The 2 Gills, Clark/Greenwell* recorded a 13-11 win over Peredur John/Mike Jones/Tony Smith and Vickie Adshead/Denise Jones/Betty Hoyle stole a 12-11 win over Roger Griffin/Ian McCarthy/Phil Roberts by taking 1 point in the final end after limit time had been called. the scores at this point had the Men leading 11-5 in games and 37-19 in points.

* Rose Fiera had a family commitment in the afternoon, so the 2 Gills had to play as a pair

And so it was into the final round which unfortunately did not go well for the Women, with the Men taking all 4 games to leave them the overall winners by 52-19.  The match was, however, a lot closer than the score suggests but the Men, with 9 first division players in their squad, just proved too powerful on the day. It is a tribute to the Club that they can put out a team of 12 Women with at least 2 others who wanted to play but couldn’t for various reasons.

Everyone enjoyed a very friendly day of petanque and huge thanks go to everyone who took part and especially to the two captains, Gill Clark and Sean Smith, who also conceived the idea of the competition, for the work they put in managing their teams. Everyone agreed that it should become an annual event.

The day finished with Gill Clark generously presenting, socially distanced of course, the trophy to Sean Smith whilst warning that the Women would be looking to take it back next year. 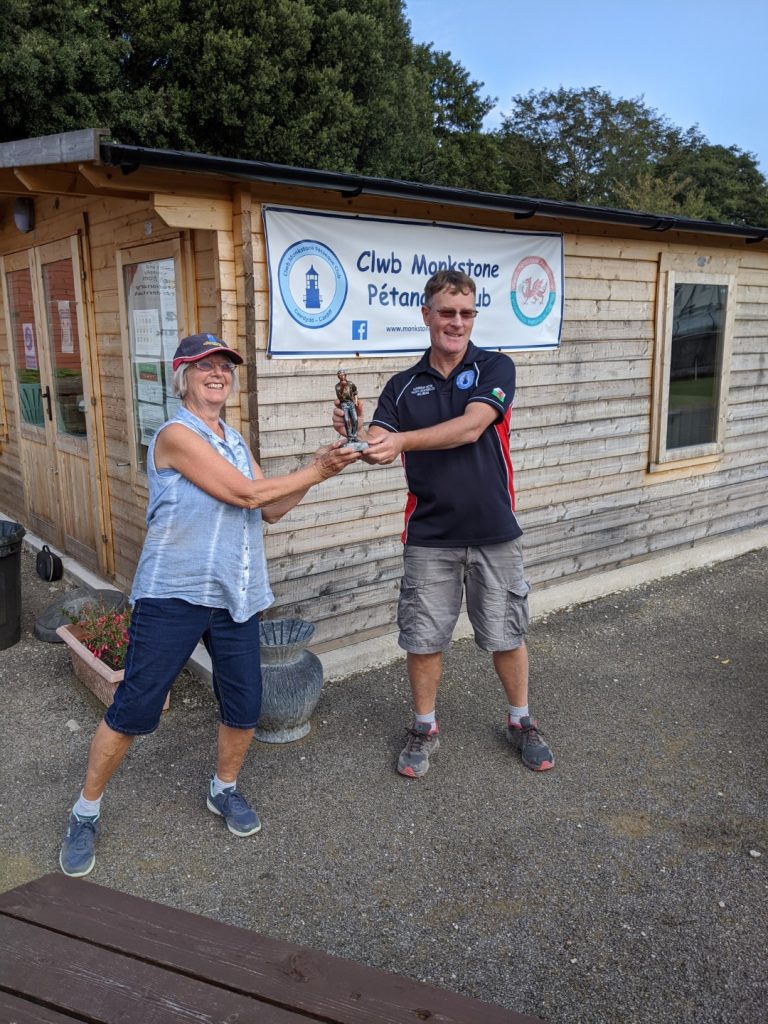 From our sports reporter – Roger Griffin

In the second game of Round 2 of the Super League, Monarchs faced Marauders, each team needing a win to close the gap on Minotaurs. In the first game, Mike J and Tony S of Monarchs soon found themselves 8-0 down against Phil and Tom and could not recover against Marauders’ accurate play, losing 13-1. In the other game, Monarchs’ Roger Green & Sean were drawing with Gareth and Michelle at 4-4, at which point Marauders stalled allowing Roger and Sean to take the lead towards a 13-4 win. So at the turnaround honours were even at 1-1.

In the second half, Mike and Tony were behind Gareth and Michelle at 3-5, when they picked up 5 points and pulled into the lead 8-5. Gareth and Michelle rallied Monarchs held their nerve and won the game 13-8. Phil and Tom started where they’d left off and raced into a 8-0 lead against Roger and Sean. Monarchs responded by taking 11 points in two ends and at 12-9 were coasting to a win, but Phil and Tom were having nothing of this, and came back to win 13-12.

An honourable draw but with Round 2 completed it’s the Minotaurs who are smiling.

SUPER LEAGUE TABLE AFTER ROUND 2

15 September 2020 / Webmaster / Comments Off on Minotaurs Extend Their Lead

In the first game of Round 2 of the Monkstone Super League, the two winners in the first round, Meteors and Minotaurs were pitted against each other knowing the winner would be top of the table at the end of Round 2.

In the first game Bernard & Jayne D came up against Norman & Ben. The game started slowly but Minotaurs kept the scoreboard ticking over not letting Meteors into the game and eventually ran out winners by 13-0. In the other game Vickie and Pete took on Keith T & Chich and found themselves 0-7 down. Minotaurs then started to put their game together and caught and overtook the opposition to finish on 13-9.

The reverse pairs started, but Bernard & Jayne still had their head in the clouds after their decisive win in the first game. Keith & Chich outplayed them in every department to record an emphatic 13-2 win. In the final game Vickie & Pete found themselves 6 points adrift again before getting going. With the score at 12-9 to Minotaurs, the game ended with one of the most remarkable shots seen for quite some time. Meteors were holding around 15cm off the jack when Pete attempted to shoot out their boule. His effort was well short but bounced off the top of another boule, went up in the air and came down on top of the jack and stayed touching it. Meteors had 2 boules left but could not push Minotaurs off the jack leaving them as 13-9 winners for an overall 3 games to 1 match score.

The Monkstone men were not able to emulate the ladies by bringing the National Doubles title back to the club in today’s contest at Pontyclun PC. Monkstone had two and a half teams with Roger Green & Sean Smith and Bernard Adshead & Roger Griffin making two pairings and Gareth Spencer teaming up with  Stuart Spencer.

The format was 2 groups of 5 but instead of there being any byes, the 2 teams who would have had byes played each other. The top 2 from each group went through to the semi-finals. Sean & Roger and the Spencers were in one group which included the favourites, Ian Bailey & Jean-Yves Robic. Bernard and Roger were in the other group which include Kon Tomczyk & Richard Harris and Derek Jones & John Attfield.

Roger & Bernard started with their bye and, having avoided them in the draw, who should they come up against but Ian & J-Y.  The Monkstone pair built up an early lead which they never relinquished to run out 13-7 winners. Could this be the start of something big? They went on to win 2 out of the first 3 games within their group leaving them, before the final round, as one of 3 teams on 3 wins but with Kon & Richard, also on 3 wins, left to play in the last round. The winners would definitely be in the semis. Kon and Richard took an early lead but Roger & Bernard managed to claw their way back to 7-7 but couldn’t keep it going and lost 13-7 which eliminated them from the competition as the other team on 3 wins also won.

In the other group, Sean & Roger put up a good show but were eliminated on 2 wins. Gareth & Stuart chalked up 3 wins which was enough in their group to see them through to the semi finals in which they went down 8-13 against Kon & Richard who themselves went on to lose in the final to Ian & J-Y.

So it was not to be for Monkstone but Roger & Bernard can take something from the fact that they were the only pair all day to beat the eventual winners.