According to a recently published list Monkstone PC is the second best Welsh Club in Europe. They feature in 46th place in a list of Europe’s best 100+ clubs, behind Wheatsheaf PC in 36th place but ahead of Caerleon in 69th place, Pontyclun in 73rd and the defunct Sir Henry Morgan PC in 103rd place.

We are not sure how these statistics were compiled but they appear to be based on the EuroCup competition.

EuroCup 2019 -Write up by Judith Smith

The European Cup for Club Teams, or EuroCup as it is also known, is specifically for CEP Federation Club teams.  The first EuroCup Championship was held in 1998 with just five Federation club teams. This year, 2019, saw 27 teams enter, with Monkstone Pétanque representing Wales.  Peter Kensett, Sean Smith, Jayne Dunn, Tony Smith, Roger Green, Roger Griffin, and Vickie and Bernard Adshead made up the team with Judith Smith as team manager.  The Wales team were in Group C along with Belgium, Sweden, Russia, Finland, England and Austria, and played at Pachy Waterloo PC, Belgium. Visit the CEP site https://www.cep-petanque.com/eurocup.html, for full details of teams, results and pictures. Also visit our Facebook for a full set of photos https://www.facebook.com/pg/MonkstonePetanque/

Team players Roger Green and Jayne Dunn, with lone supporter Barbara, were travelling by train and due to the very high temperatures of over 37˚ trains stopped working causing them all to get very hot and bothered, and delayed.  Those choosing to travel under water did better!

Thursday morning saw us all travel to Pachy Pétanque Club, which was very conveniently placed close to the Ibis Hotel where we were staying. Practice duly took place but due to the high temperatures, it was decided to practice only for a couple of hours before the first of 6 “Encounters” (comprising Triples, Singles and Doubles). Games were all scheduled to be played under cover due to the high temperatures.  However, it was still extremely hot inside as the Boulodrome had a tin roof, and of course no air conditioning! Gallons of water were consumed over the weekend.   The pistes were very challenging, and the play was of very high standard.  However, Monkstone PC did themselves proud with everybody in the team being in winning games and only one “fanny”, gracefully taken by Bernard for the sake of the team.

The first Encounter on Thursday afternoon saw the team face Baldock Town PC, England.  Jayne’s play was outstanding, winning her singles 13 v 4 against Emma Coggins. Roger Griffin and Vickie had a great game losing only by 2 points in their doubles match.

Our second Encounter of the competition on Friday morning against PC Viener Trilogie, from Austria, saw both Tony and Vickie win their singles, with Roger Green gaining 11 points, Roger Griffin 10, Sean 8 and Bernard 7.  A very good result! Friday afternoon the team played against Finland’s PSC Järvenpää. A tough bunch of players but Roger Green and Peter won their doubles and credible scores were obtained in the singles and triples.

Saturday saw an Encounter for the team against Pachy Waterloo, the home team from Belgium.  What a team – some of them looked like a team of Olympic shot-putters!  Roger Green, Sean and Bernard put up the strongest fight, obtaining 7 points in their triples.  Peter Kensett gave the fearsome Ibrahima Diallo a run for his money, trying to talk his way out of his singles game but it was futile as the team had truly met their “Pétanque Waterloo”, going down fighting all the way! Although the Encounter was one of the most difficult of the competition, it was also one of the most enjoyable, and played in good spirit. The afternoon saw the team having a well-deserved rest to gather their strength for the remaining Encounters against Russia and Sweden.

With renewed vigour Sunday morning, the team faced their “friends” Buddy Moscow. Russia tried to dazzle the team with their bright team shirts as well as dancing and canoodling on the piste (causing Jayne and myself to check the rules for “sex on the piste” but to no avail!). But they couldn’t put the team off.  Tony and Roger Green both won their singles 13 v 4. Roger and Sean won their doubles 13 v 9, and Roger Griffin and Vickie 13 v 8, even if it did take them 2 hours and delayed the whole competition.  The best result of the tournament.

The final game against Sweden Sörbyängens Bouleklub saw Bernard win the only game in this Encounter, singles 13 v 6, ending the game with a spot carreau. Just goes to show you, like the Swedish you need to start playing when you are 7 years old!

They think it’s all over ……………. well, the 2019 Nations Veterans Cup is now! After months of planning and preparation by the Monkstone Club, the weekend went by in a flash. Those who were there witnessed some excellent boules played for the most part under glorious Cardiff sunshine. 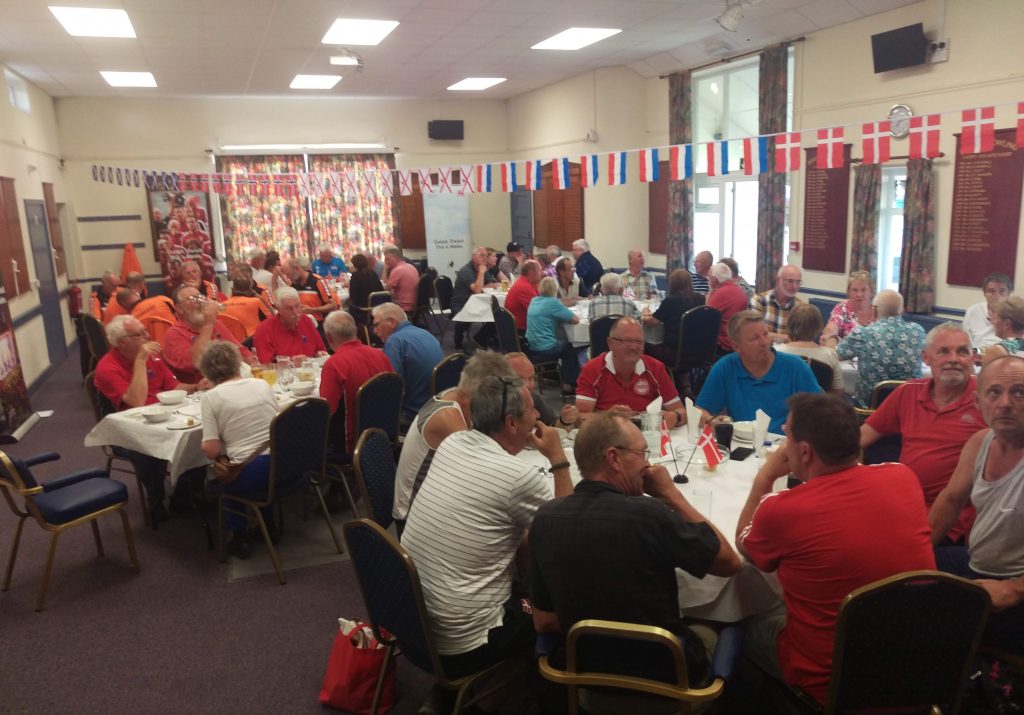 On Friday evening, the teams gathered in the Penylan Club for opening meal and the welcome speeches from Bob Pugh on behalf of the WPA and Mike Jones for the Monkstone Club.

The competition commenced with the traditional photoshoot before play got underway under the watchful eye of umpire Mike Pegg from England.

Three rounds were played on the first morning before the teams went in for an excellent lunch with Denmark 2 taking an early lead on 8 points followed by Scotland 2 on 7 points and Denmark 1, Jersey 1, Norway 1 and Wales 2 all on 6. Denmark were the clear leaders in the competition with 14 points followed by Norway on 9 and Wales 8.

So it was on to the afternoon with another four rounds to be played. As the thermometer rose so did the standard of play although there was a brief respite when it clouded over and the temperature dropped before it cleared again. 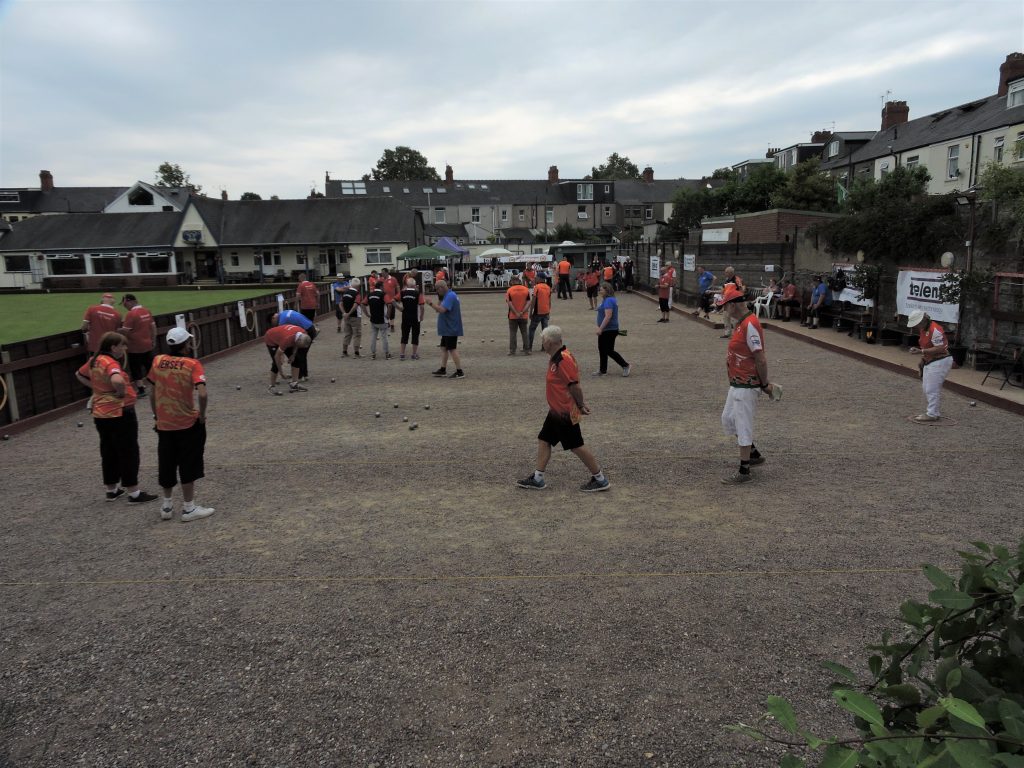 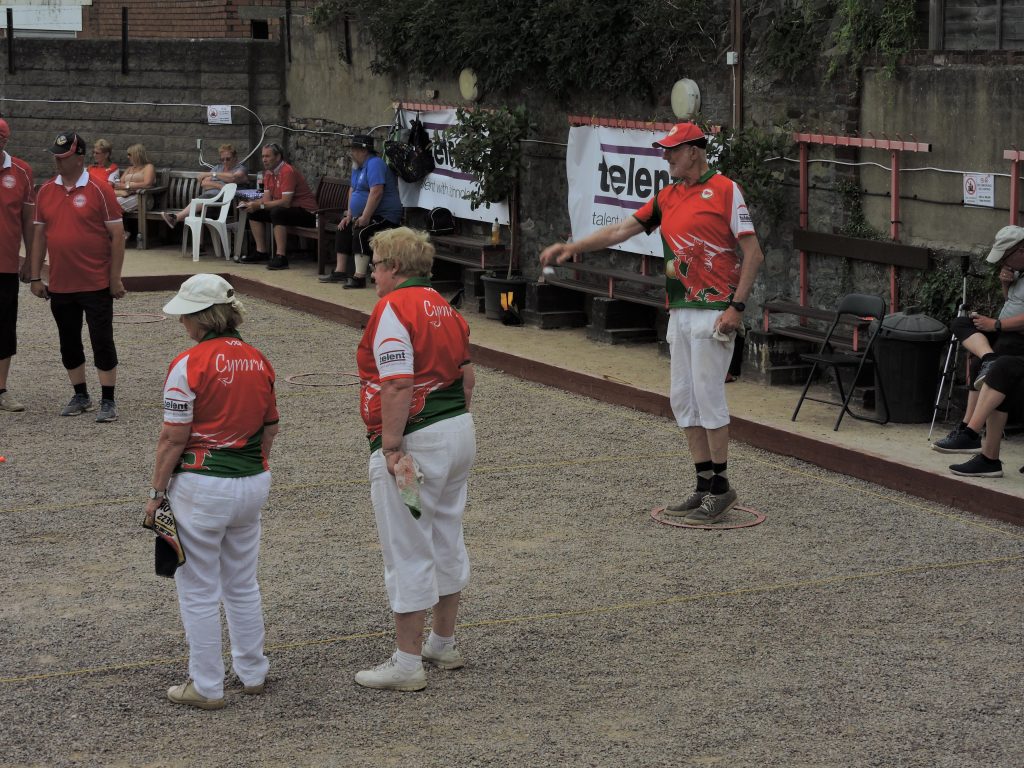 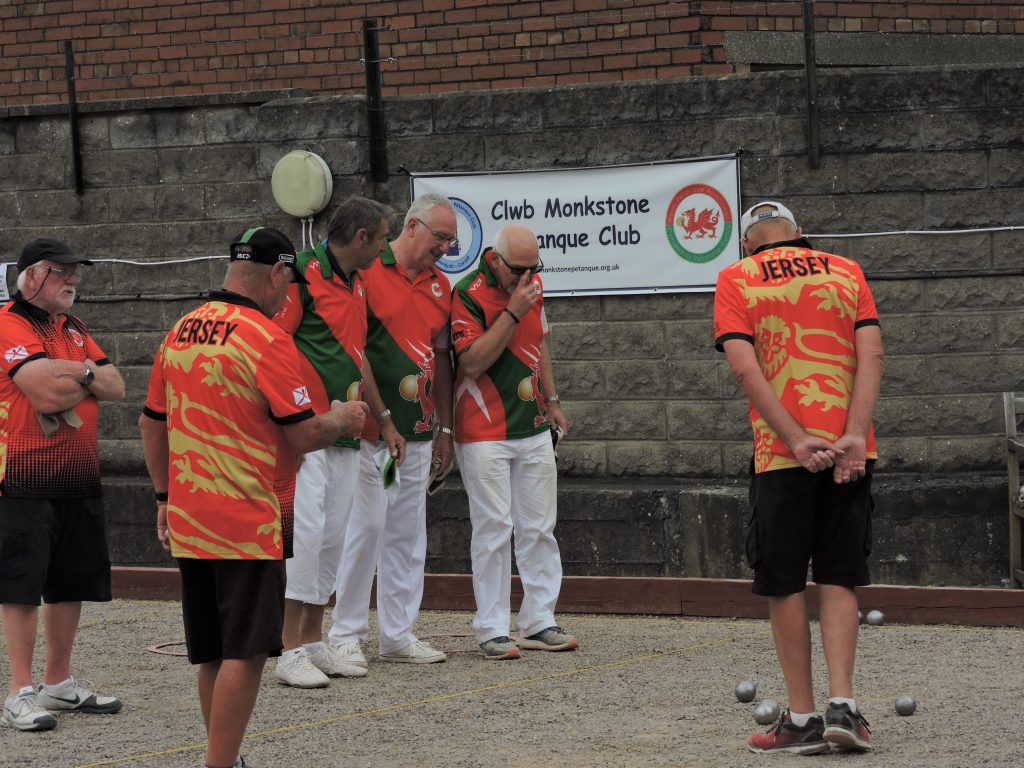 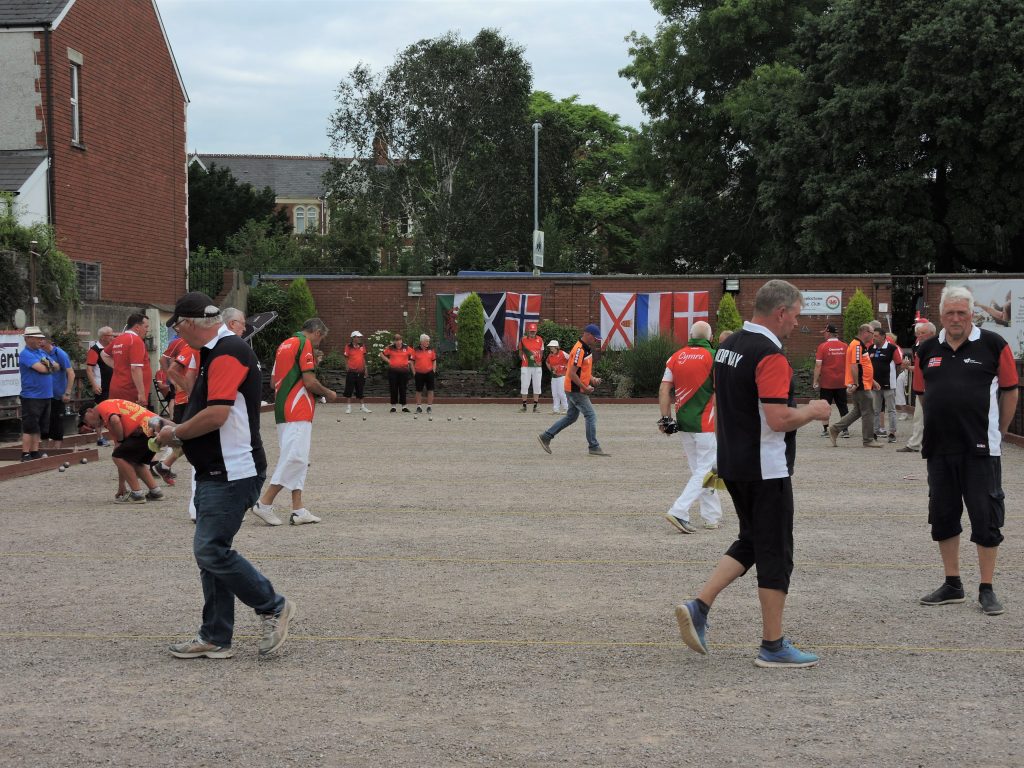 At the end of the first day’s play and with seven rounds played Norway 1 had taken a slight lead on 15 points with both Denmark 1 & 2 on 14 points. In the overall competition Denmark had taken an almost unassailable lead with 28 points followed by Norway on 20 and Holland on 18.

Teams then retired to the bar and then for another excellent dinner prepared and served by 5 very hard working members of the Monkstone club. 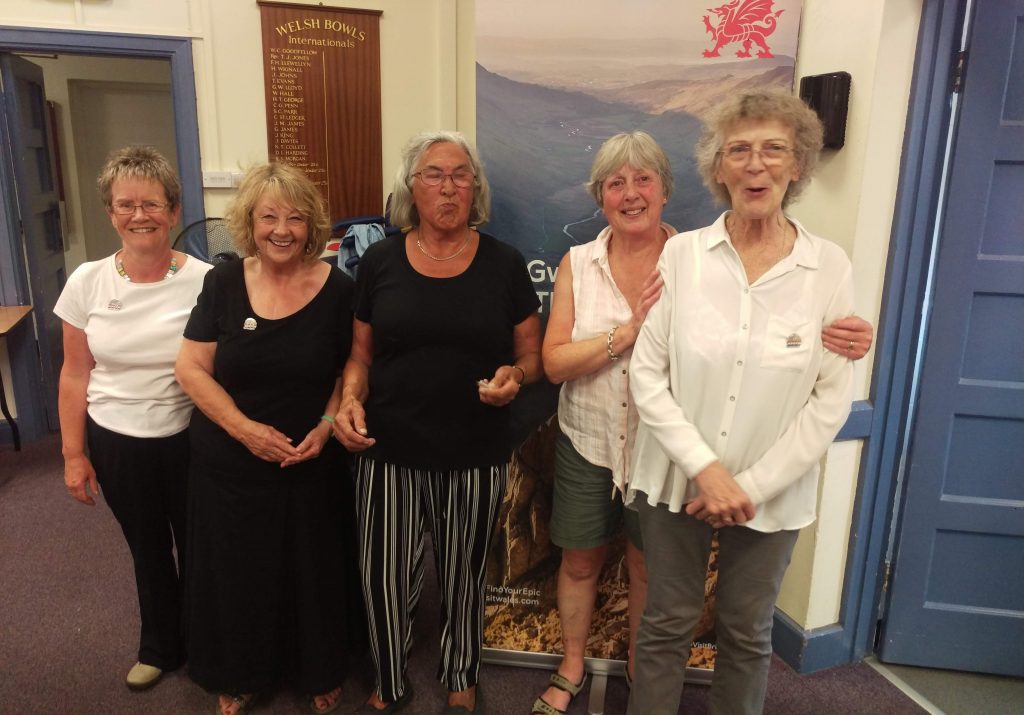 After a good night’s sleep and a hearty breakfast the teams were ready for the final three rounds on Sunday morning. The weather again was very warm and demands for bottles of water continued at the same high rate as the previous day.

The big question was whether Norway or Holland could put together a late run to catch Denmark. When the results for Round 8 came in, Denmark had gained a further 5 points by beating Norway in both matches putting them on 33 points – with Holland only taking 3 points it meant that Denmark could not be caught. Whilst Denmark 2 had taken a 1 point lead over Denmark 1, the Best Team award could still go to either of the Denmark teams, Norway 1 or Holland 1. 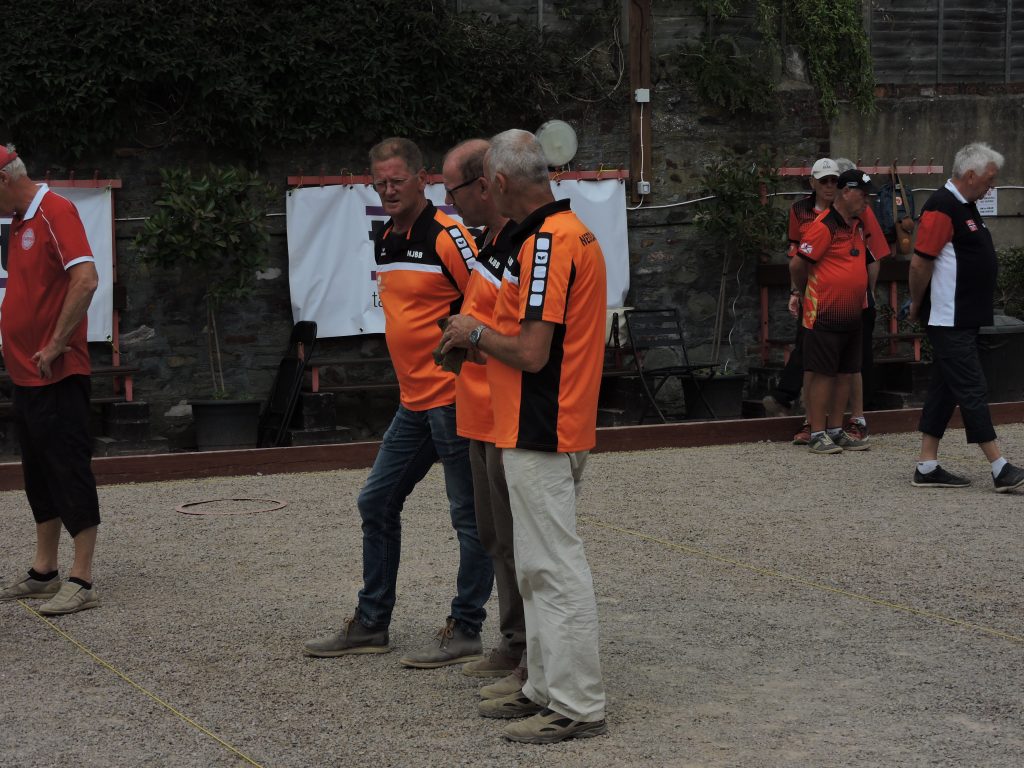 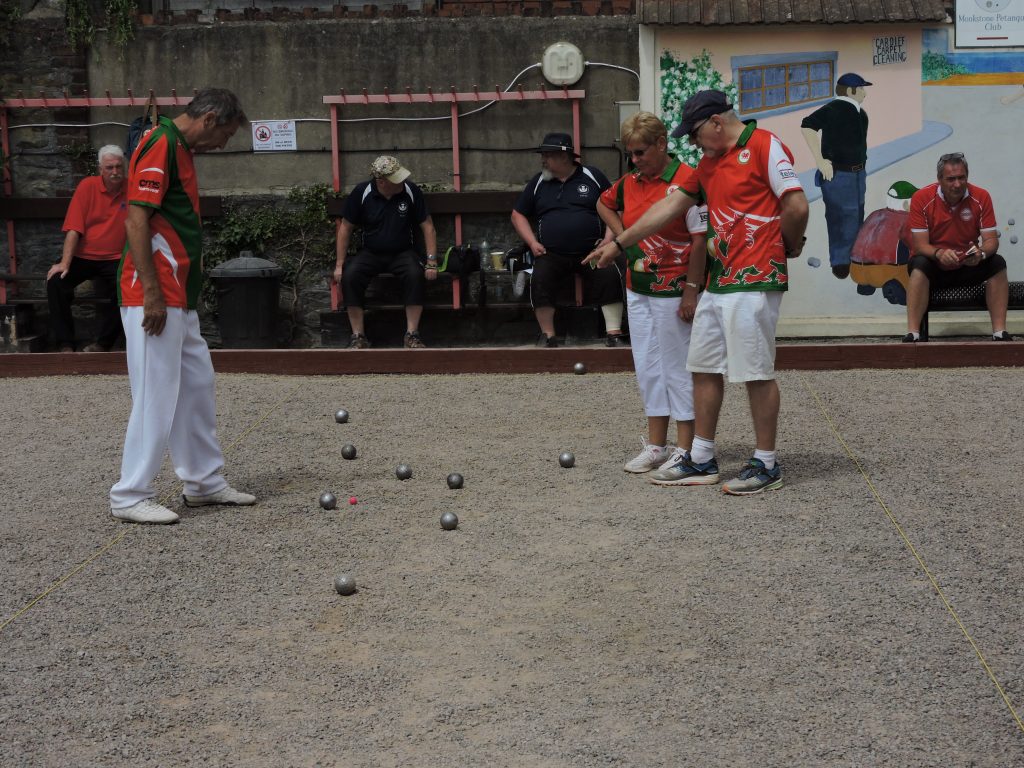 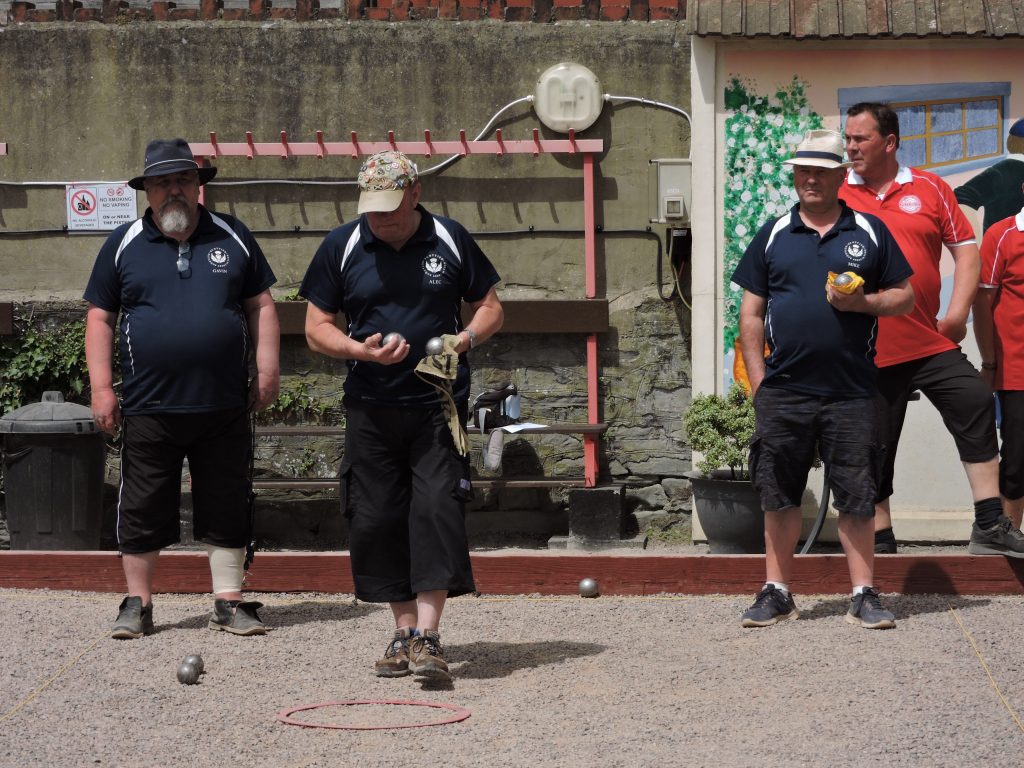 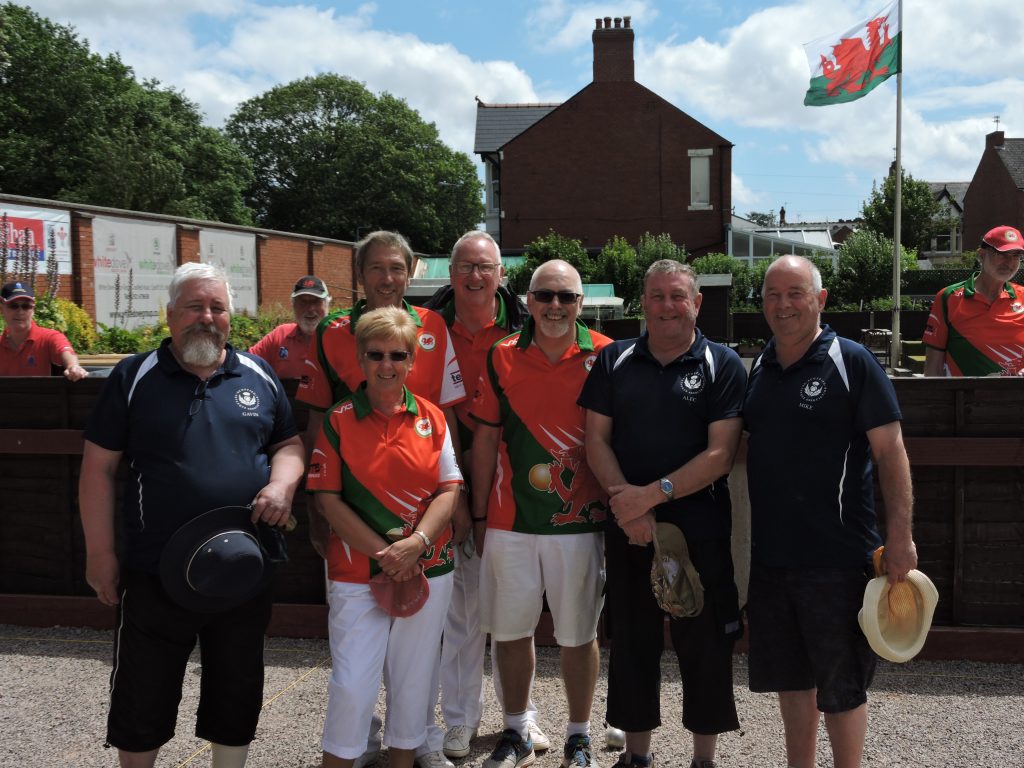 So we came to lunch time and with Round 10 complete all that remained was to calculate the final scores. In the race for Best Team Denmark 1 came out on top with 24 points closely followed by Denmark 2 on 23 points and Norway 1 on 19 points. In the overall competition Denmark were declared 2019 Nations Veterans Cup winners with 47 points with second place going to Holland on 34 points. 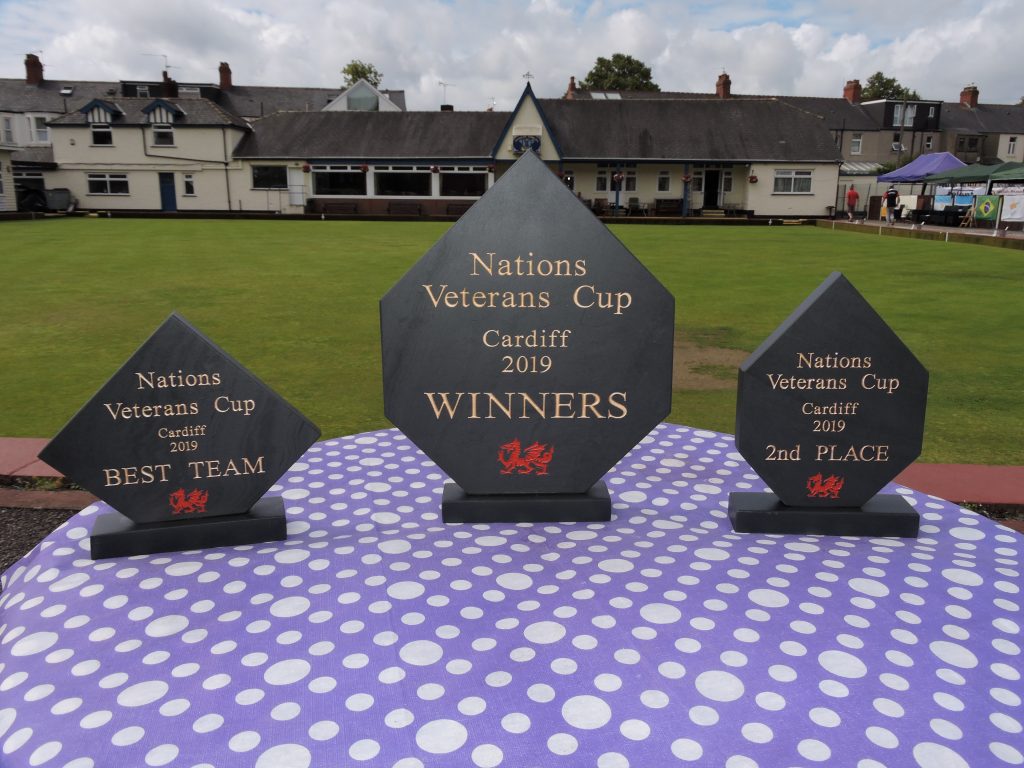 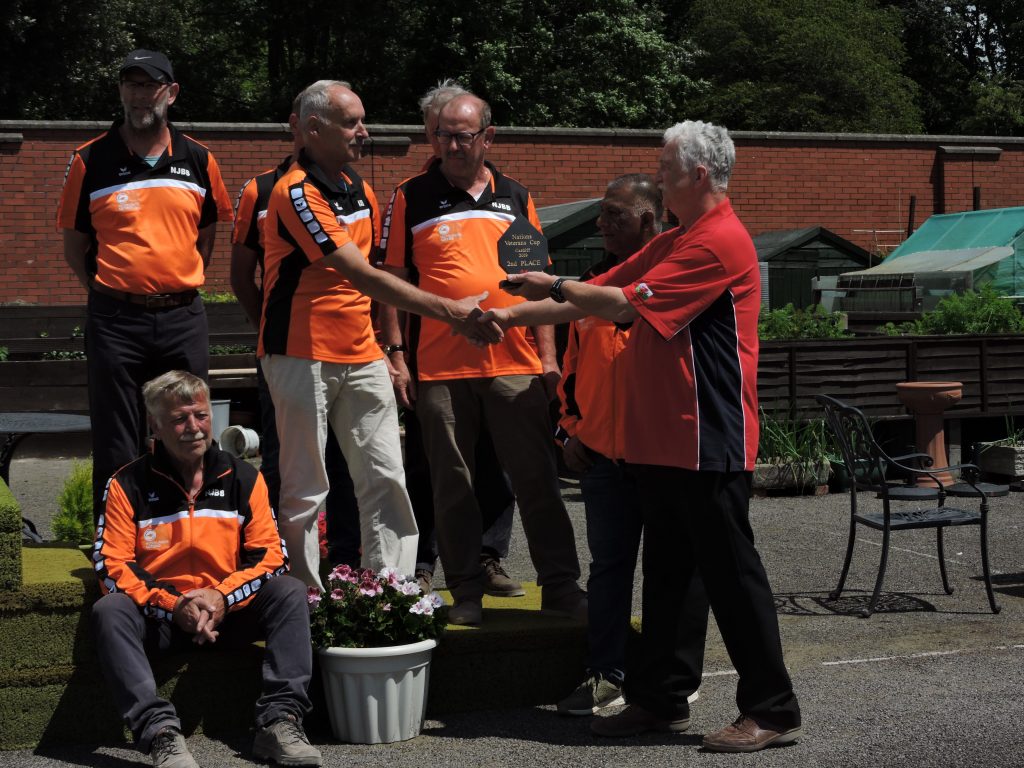 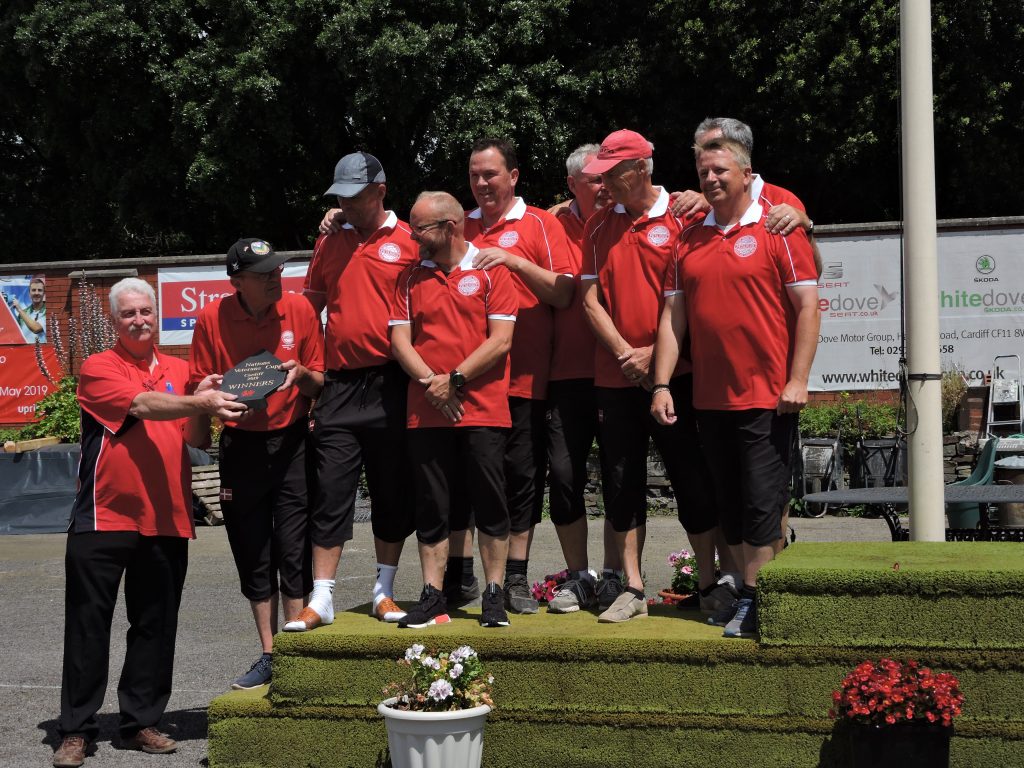 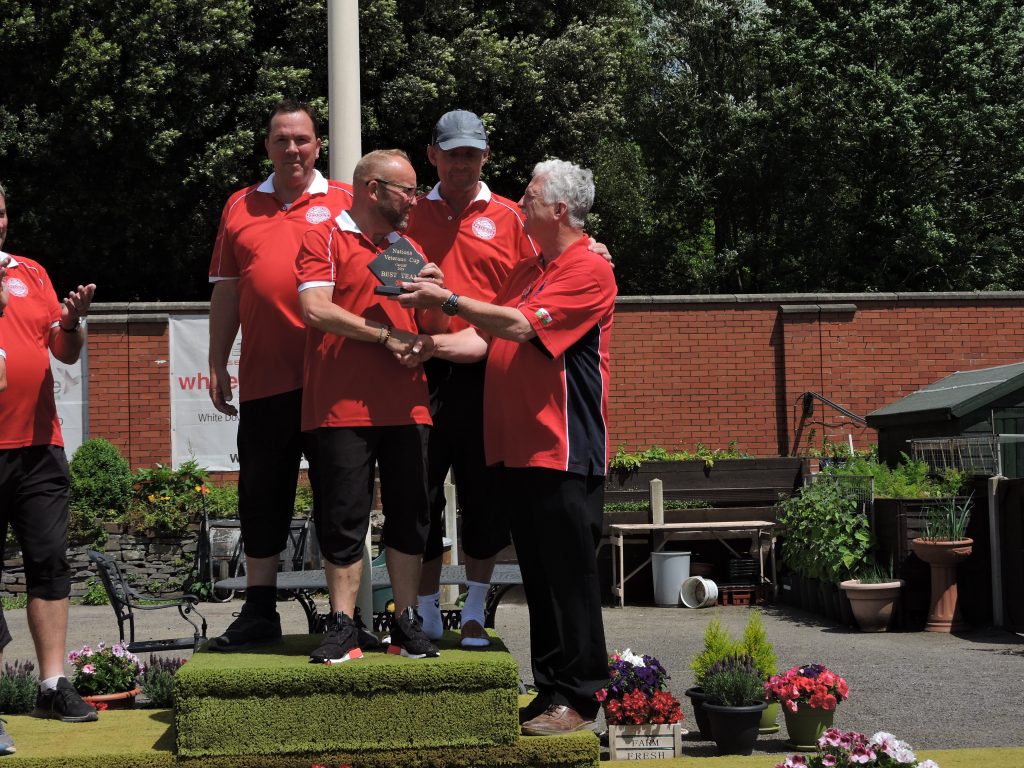 The final scores recorded on the multi-function laser display scoreboard 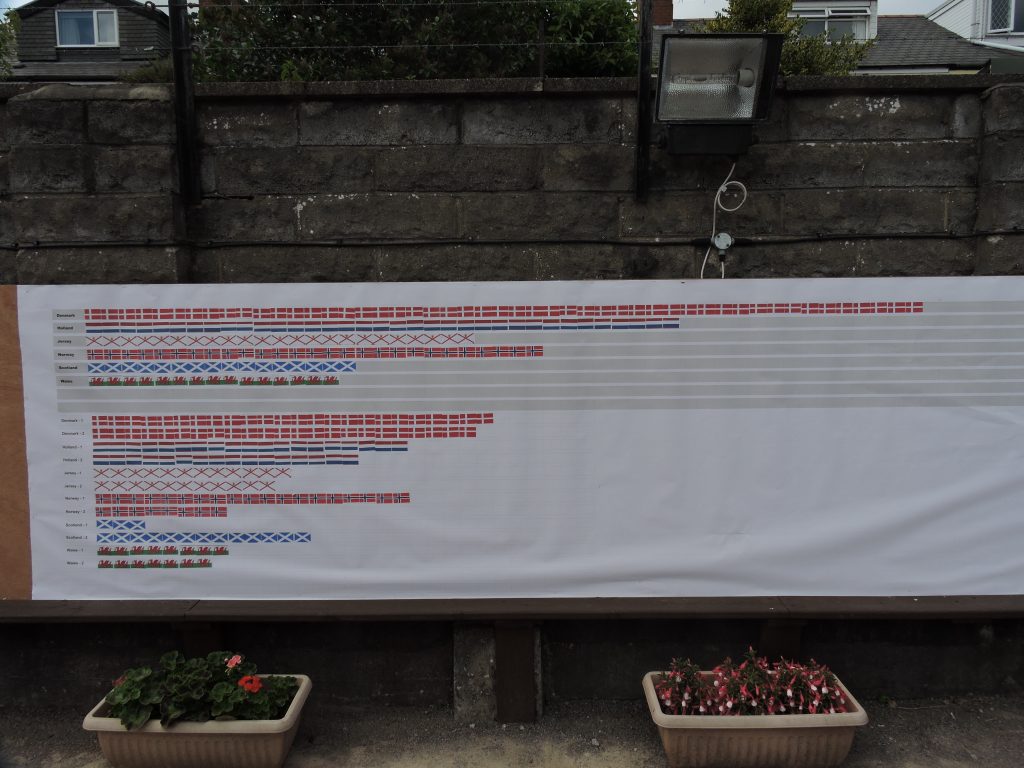 The Final tables for the individual teams and for the nations 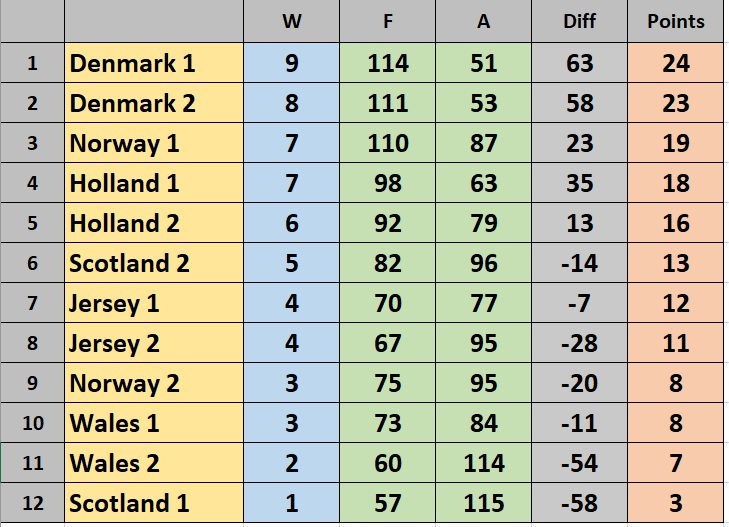 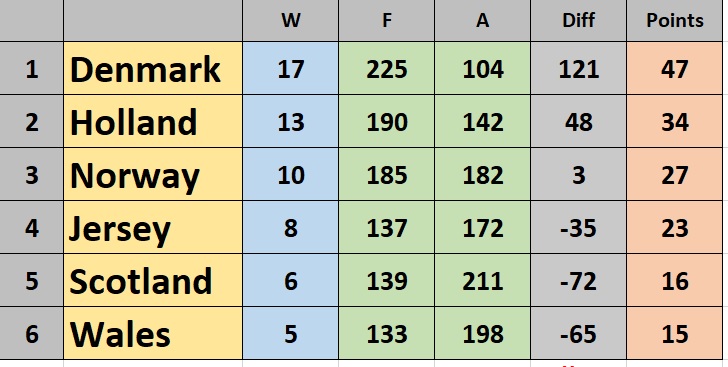 Almost, it seemed, as soon as it had started the 2019 Nations Veterans Cup was over with all the teams saying what a great time they had had in Cardiff and thanking the Monkstone Club for the work that had gone into the organisation of the competition and the excellent catering over the weekend.

After months of planning, a lot of hard work with not a little worry and chewed nails, the Nations Veterans Cup is coming to the Club on 28 & 29 June 2019.

Little did the four Monkstone players (Roger Griffin, Tony Smith, Bernard & Vickie Adshead) who represented Wales in last year’s competition in Denmark suspect that the following year we would be hosting the event in Wales. A series of conversations with Henrik Toft of the Danish Federation led to an invitation to the WPA to stage the 2019 edition. Monkstone PC agreed to underwrite the event and on that basis the WPA accepted the invitation.

The competition was inaugurated by the Danish Federation a few years ago and has been held there every year up to 2018. It was conceived as an invitational, friendly, veterans (+55 ) competition for the smaller federations and associations. This year we welcome teams representing Holland, Jersey, Norway, Scotland, Denmark and of course Wales.

The Club is immensely proud to be hosting what is believed to be the first international competition of its kind to be held in Wales. Let’s hope that the weather is kind to us and that we have a friendly but hard fought competition.

For more information about the event, follow this link for the Official Programme. 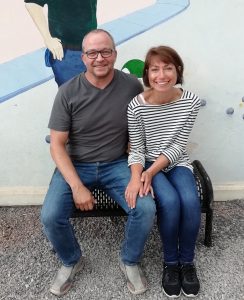 Vohwinkel Petanque Club, Wuppertal, western Germany. Thomas and Tania were holidaying in the area and, having heard of our club, decided to pop in for a chuck.
They enjoyed their morning with us and were presented with two club caps as a memento of their visit. Vohwinkel Petanque is similar in size to our club with around 70 members and is part of a sporting complex where they play a range of sports from badminton to volleyball.
We exchanged information with Thomas and Tania and who knows where that might lead as, following our visits to Leipzig PC, we are building up connections with German clubs.
Category: International /
Wordpress Theme by ThemeZee