The first club competition of the autumn series saw an entry of 24 members, all clearly glad to have a fine day after so much rain recently. It made for a perfect number of 8 teams with each team having just one first division player. The pistes were wet in parts but quite playable.

The first round saw wins for the following teams:

In round 2 Roger Green’s team faced Team Sean and won by two points, while Mike Jones’s triple won their game comfortably. So, with Team Barney going down to a narrow defeat, only Roger and Mike had won their two games. But as they entered round 3, Team Mike had a superior points difference over Team Green. Which team would keep their nerve?

Team Mike’s opponents were Peter K, Sandy and John Chich who ended the President’s dream of winning the coveted trophy with a thumping 13-3 defeat. 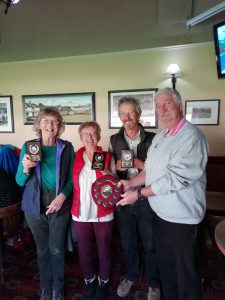 Meanwhile, Roger, Gill and Barbara cruised to a 13-1 victory in their game, emerging triumphant as the only team in the competition with three wins. Team Barney took second place on points, with Team Mike third.

So many congratulations to Roger, Gill and Barbara and thanks to everyone who took part in a really enjoyable competition. It was also a pleasure to see the return of Wiggy from foreign climes and it was typical of his generosity as a player not to trouble the scorer unduly.